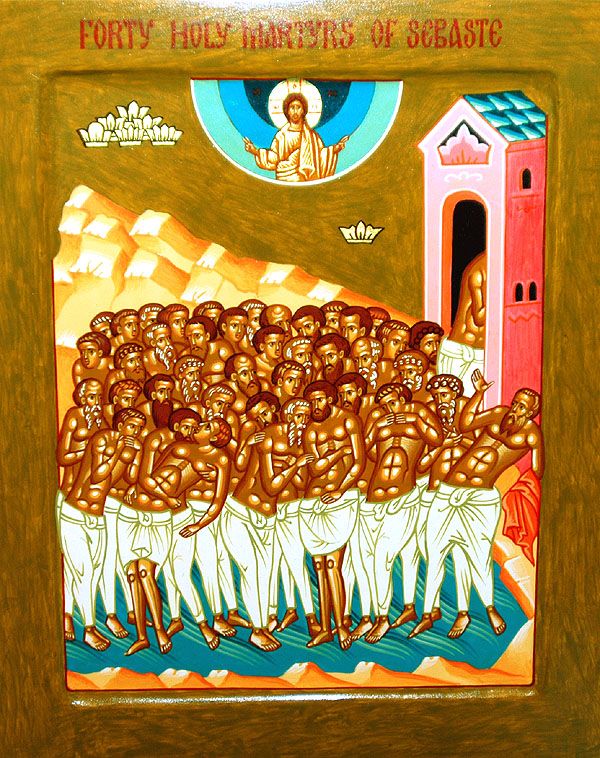 Would you willingly die for your faith? It is a difficult question to answer until we are actually faced with that predicament. The term “martyr” has developed negative connotations in recent years due to terrorists who perpetrated murderous acts in the name of their “God.” Suicide bombers kill themselves in order to inflict as much murder and chaos as possible. They consider themselves martyrs, but they are not. They have committed suicide and have killed themselves. This is not a true act of martyrdom. Rather, it is an act of hatred, murder, the murdering of one’s self, as well as the murdering others. True martyrs are killed by others because they refuse to relinquish their faith. The motivation of Christian martyrs is their love for Christ, and their desire to remain faithful to Him.

The foundations of the Christian Church have been established by the blood of martyred Saints who refused to deny Christ, beginning with the Apostles. During the first 300 years of the fledgling faith, tens of thousands of Christians were executed for refusing to offer a sacrifice to a pagan god. These were acts of faithfulness and courage, especially because the Christian martyrs endured horrific suffering. Many were tortured before being executed, and the manners of death were cruel and painful, such as crucifixion, being boiled in oil, flayed or whipped to death, stoned, dragged by horses or subjected to being attacked by wild animals publicly for sport in the Colosseum. The women were also often raped and prostituted. These martyrs were committed to Christ and are the heroes of our faith. Their deaths inspired others to convert to Christianity. In fact, it only took about 300 years for Christianity, which was despised and persecuted, to finally be declared the official religion of the Roman Empire. This movement change the world.

The following story of the 40 Holy Martyrs of Sebaste who are commemorated on March 9 by Eastern Orthodox Christians is just one account, which inspired many early Christians to convert to the faith (retrieved from https://oca.org/saints/lives/2015/03/09/100706-40-holy-martyrs-of-sebaste):

One of the military commanders of that time in the Armenian city of Sebaste was Agricola, a zealous champion of idolatry. Under his command was a company of forty Cappadocians, brave soldiers who had distinguished themselves in many battles. When these Christian soldiers refused to offer sacrifice to the pagan gods, Agricola locked them up in prison. The soldiers occupied themselves with prayer and psalmody, and during the night they heard a voice saying, “Persevere until the end, then you shall be saved.”

On the following morning, the soldiers were again taken to Agricola. This time the pagan tried flattery. He began to praise their valor, their youth and strength, and once more he urged them to renounce Christ and thereby win themselves the respect and favor of their emperor.

Seven days later, the renowned judge Licius arrived at Sebaste and put the soldiers on trial. The saints steadfastly answered, “Take not only our military insignia, but also our lives, since nothing is more precious to us than Christ God.” Licius then ordered his servants to stone the holy martyrs. But the stones missed the saints and returned to strike those who had thrown them. One stone thrown by Licius hit Agricola in the face, smashing his teeth. The torturers realized that the saints were guarded by some invisible power. In prison, the soldiers spent the night in prayer and again they heard the voice of the Lord comforting them: “He who believes in me, though he die, yet shall he live (John 11:25). Be brave and fear not, for you shall obtain imperishable crowns.”

On the following day the judge repeated the interrogation in front of the torturer, but the soldiers remained unyielding.

It was winter, and there was a severe frost. They lined up the holy soldiers, threw them into a lake near the city, and set a guard to prevent them from coming out of the water. In order to break the will of the martyrs, a warm bath-house was set up on the shore. During the first hour of the night, when the cold had become unbearable, one of the soldiers made a dash for the bath-house, but no sooner had he stepped over the threshold, then he fell down dead.

During the third hour of the night, the Lord sent consolation to the martyrs. Suddenly there was light, the ice melted away, and the water in the lake became warm. All the guards were asleep, except for Aglaius, who was keeping watch. Looking at the lake he saw that a radiant crown had appeared over the head of each martyr. Aglaius counted thirty-nine crowns and realized that the soldier who fled had lost his crown.

Aggias then woke up the other guards, took off his uniform and said to them, “I too am a Christian,” and he joined the martyrs. Standing in the water he prayed, “Lord God, I believe in You, in Whom these soldiers believe. Add me to their number and make me worthy to suffer with Your servants.” Then a fortieth crown appeared over his head.

In the morning, the torturers saw with surprise that the martyrs were still alive, and their guard Aggias was glorifying Christ together with them. They led the soldiers out of the water and broke their legs. During this horrible execution the mother of the youngest of the soldiers, Meliton, pleaded with her son to persevere until death.

They put the bodies of the martyrs on a cart and committed them to fire. Young Meliton was still breathing, and they left him on the ground. His mother then picked up her son, and on her own shoulders she carried him behind the cart. When Meliton drew his last breath, his mother put him on the cart with the bodies of his fellow sufferers. The bodies of the saints were tossed in the fire, and their charred bones were thrown into the water.

Three days later the martyrs appeared in a dream to Saint Peter, Bishop of Sebaste, and commanded him to bury their remains. The bishop together with several clergy gathered up the relics of the glorious martyrs by night and buried them with honor.

There is a pious custom of baking “skylarks” (pastries shaped like skylarks) on this day, because people believed that birds sing at this time to announce the arrival of spring. Forty “skylarks” are prepared in honor of the Forty Martyrs.