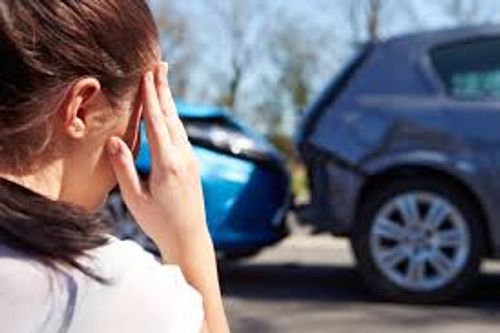 A couple of weeks ago, I was stopped at a red light. I was distracted because I was in an unfamiliar neighborhood a bit lost. I was checking the GPS on my car, and at the same time, I was using my visor’s mirror to apply lipstick. Needless to say, I was multitasking at an inopportune time. I heard a honk from the driver behind me, and wondered why he was honking, when I felt a bit of a nudge at the rear of my car. I became confused wondering how the car behind me could have rear-ended me. Suddenly, the fog lifted, and I realized that it was my car that rolled backwards and hit the Jeep behind me.

In hindsight, it was at this moment that my mind began to rationalize what I did. I began telling myself that I barely touched the Jeep, and therefore, there couldn’t be any damage. I waited for the other driver to get out of his car. We were still stopped at the red light, and it seemed that much time had passed, at least a full minute or more. He never got out, so I never got out of my car. The light finally turned green. It was my moment of decision. What should I do? There was no place to pull over, so I proceeded very slowly.

I received a letter that filled me with fear and regret! The sheriff wrote to tell me that the driver of the Jeep had made a report using my license plate. He reported a hit and run! I panicked! Hit and run! That is not me! I would never do such a thing, but when faced with the facts, I knew that is exactly what I did! I called the sheriff as soon as I could and explained what had happened. Strangely, I still believed that there couldn’t possibly be any damage to the other car. I barely touched it.

The sheriff asked to meet me the next day to take a look at my car. Before meeting him, I double-checked my car for damage. I found none, so I was still convinced that the other car couldn’t possibly have any damage from my car. When the sheriff examined my car, it only took him about 30 seconds to find the tiniest of dents, almost invisible, yet I could see it plainly as he pointed it out. According to the sheriff, the tiny dent lined up with the location of the dent on the Jeep. My conscience flared up once again. I reassured the sheriff that I would take responsibility. He wrote down my information and would call the driver of the other car to let him know.

What did I learn from this experience? Lots! Of course, the obvious lesson is do not assume anything. Even with the slightest of collisions, stop, get out of the car and check for damage on both cars. Do not leave the scene of an accident, no matter how insignificant it may seem. However, this was something I already knew! The greater lesson I learned is how powerfully our minds can rationalize our sins. I had myself completely convinced that everything was fine because there was no damage. Now, I am usually not the kind of person that allows my mind to deceive me, but this time, it did. Rationalizations can be very powerful, when we want to believe them.

Of all the lessons I learned from this experience, the following Bible verse is the greatest lesson I absorbed: “No temptation has overtaken you that is not common to man. God is faithful, and he will not let you be tempted beyond your strength, but with the temptation will also provide the way of escape, that you may be able to endure it” (1 Corinthians 10:13). I was reminded that God will provide a way to soothe my conscience. I committed the sin, but now I would be able to take responsibility. I was actually thankful that the other driver reported the incident. I asked God for forgiveness and decided that I must also apologize to the driver. I would apologize and thank him for reporting it to the sheriff. I was extremely remorseful and ashamed of my poor decision and for allowing myself to be deceived.

However, the story doesn’t end here. There was one more lesson that God had to teach me. Yesterday, when I had returned to my car, I discovered that someone had scraped and dented my entire right side of my rear bumper, while it was parked. Oh, well. I know God hates lies, especially if they are lies to ourselves!