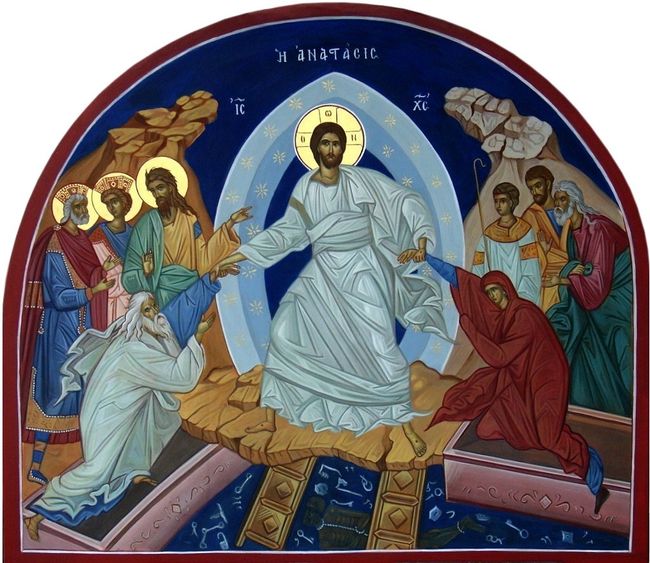 Crucifixion was meant to publicly shame criminals and political agitators. Jesus Christ, being the only human who never sinned, was neither a criminal nor a political dissenter. The perfectly innocent Jesus was crucified between two thieves. Even while on the cross, Christ had mercy on His executioners and all those who conspired against Him and mocked Him. As He hung on the cross, agonizing in excruciating pain, He exclaimed “Father, forgive them; for they do not know what they are doing” (Luke 23:34). One of the criminals also being crucified began ridiculing Jesus saying, “Are you not the Messiah? Save yourself and us!” But the other rebuked him, saying, “Do you not fear God…we indeed have been condemned justly, for we are getting what we deserve for our deeds, but this man has done nothing wrong.” Then he said, “Jesus, remember me when you come into your kingdom.” He (Christ) replied, “Truly I tell you, today you will be with me in Paradise” (Luke 23:39-43). At that moment, the repentant thief crucified with Jesus was promised eternal life in Paradise. This thief heard Christ forgive His murderers and recognized His innocence and goodness. He feared God and acknowledged that he deserved his punishment. He repented of his sin.

But what happened after Jesus died? Where was He from 3:00 pm Friday afternoon until early that Sunday morning when He rose from the dead? Immediately after Jesus breathed His last, “The earth shook, and the rocks were split. The tombs also were opened, and many bodies of the saints who had fallen asleep were raised. After his resurrection they came out of the tombs and entered the holy city and appeared to many” (Matthew 27:51-53). Not many are familiar with this passage, but remarkably, many of the dead were resurrected, and after Christ’s resurrection, they appeared to numerous people in Jerusalem. What happened here and why?

According to Paul in Ephesians 4:9, Christ “descended into the lower parts of the earth.” Peter tells us, Christ “was put to death in the flesh, but made alive in the spirit,  in which also he went and made a proclamation to the spirits in prison” (1 Peter 3:18-19).  Where are the spirits in prison? The place of the dead. The Jews called this place She'ol. It seems to be divided into two areas, Abraham’s Bosom and Hades. There is a story that Jesus told about the poor beggar, Lazarus (not the one raised from the dead) and the rich man. The rich man lived a life of luxury and feasting, while poor Lazarus, covered in sores and starving, only longed to eat the crumbs from the rich man’s table. Both men died, but the rich man went to a place of torment and Lazarus to Abraham’s Bosom. According to Luke16:26, Abraham told the rich man, “between you and us a great chasm has been fixed, so that those who might want to pass from here to you cannot do so, and no one can cross from there to us.” This is the place where Christ descended. This is the great victory, which He triumphantly seized from Satan.

Christ died and immediately His spirit was transported to the place of the dead. According to some early church fathers1, Jesus tricked the devil because He entered as a human. The place of the dead was Satan’s prison. Now, imagine…Christ arrived in Hades with pierced hands and feet and a wound in His side. What a magnificent sight it must have been! He must have appeared in a glorious light extinguishing the darkness of the underworld. The dead must have been bewildered to see God in their presence, in the place of the dead. Christ, being God, penetrated the devil’s dominion to proclaim the Good News to the lost. He came to call all to receive the reward of eternal life. He came to redeem any who would receive Him. Just like the repentant thief, those penitent spirits were also resurrected on Easter Sunday and accompanied Christ to Paradise. That somber place of death was now filled with joy and celebrating. Innumerable saints from the beginning of time were redeemed and appropriated from the clutches of the evil one. Satan must have been furious to lose so many. The demons must have been filled with terror. Christ broke open the gates of hell and freed those made righteous by the shedding of His blood. No wonder Paul proclaimed with joy (1 Corinthians 15:54-55):

“Death has been swallowed up in victory.”

“Where, O death, is your victory?

Where, O death, is your sting?”

Revelations 12 describes a great battle that broke out in heaven between the angels and the dragon, Satan. The devil and his demons fought against the angels but were defeated “for the accuser of our brothers has been thrown down, who accuses them day and night before our God” (Revelation 12:10). Satan was cast down to the earth, along with his demons. He can no longer condemn those who have been saved by the blood of Christ’s sacrifice. They have been thoroughly cleansed of their sins. “Rejoice then, you heavens and those who dwell in them! But woe to the earth and the sea, for the devil has come down to you with great wrath, because he knows that his time is short!” (Revelation 12:12). When Christ descended into the underworld, He set free the captives and defeated the devil, revoking his power over man.

Christ descended into the place of the dead and saved those in bondage. He rose from the dead releasing all those who received Him. Heaven must have been astir with all its new inhabitants, rejoicing and praising God for such an overwhelming victory! Adam and Eve, Noah, Abraham, Isaac, and Jacob, Jacob’s son Joseph and his eleven brothers, David and Solomon, Moses, Isaiah, Jeremiah, Daniel and all the prophets must have been elated to finally be with their Lord. All the Gentiles who did not know God during their lifetime were also able to choose to receive Christ. Jesus brought the Good News to all who would receive Him.

Christ’s Resurrection Day, Easter or Pascha, was a grand reunion of all those from the beginning of time, who chose to love God but were imprisoned by sin and death. We, too, have been freed from death. Christ redeemed us. Now, all who love Christ are permitted into heaven, into the presence of God. This is the significance of Easter. We rejoice because all from Adam until the last day can receive eternal life in the loving presence of God. It is a decision we make of our own free will. Rejoice! For Christ is Risen! Truly He is Risen!

1 Bishop Hilarion Alfeyev, “Christ the Conqueror of Hell,” lecture given on November 5, 2002, retrieved from  http://orthodoxeurope.org/page/11/1/5.aspx